DeLong from SCSHOF on Vimeo. 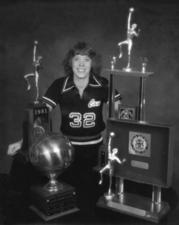 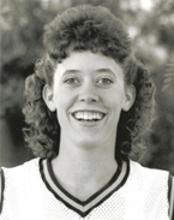 Vonnie (Thompson) DeLong was one of the finest basketball players Carrollton High School has  ever produced. The four-year starter (1979-82) helped the Cavaliers to three Class C state championships and scored over 1,000 points in her career. Carrollton was 102-5 in Thompson’s four-year career. During her freshman year  she averaged 13.9 points and led the team in steals and assists as the Cavs won its first state championship. As a sophomore she earned first team All-Conference and All-Area honors, as well as All-State laurels. As a junior she averaged 17 points, had 121 assists, 81 rebounds and 94 steals to nab first team All-Conference, All-Area and All-State honors. In her senior year Thompson averaged 13.5 points, 4.4 steals and 4.7 assists a game. For her efforts she landed first team All-Conference, All-Area, and All-State recognition as well as third team All-America honors. She tallied 17 points in the 1981 state championship game and 22 points and six assists in the ’82 title game. Thompson was also a four-year varsity letter winner in softball where she earned first team All-Area and All-conference honors her junior and senior season as well as All-State as a senior. She played basketball collegiately at the University of Notre Dame from 1983-85 before transferring to the University of Michigan. After sitting out a season because of transfer rules, she averaged 36 minutes a game for the Wolverines during the 1986-87 season, averaging 7.3 points-per-game. She broke the single-season assist record with 147 and was named co-MVP. She was named team captain her senior year and she broke her own single-season assists record with 156. She averaged 7.3 points and had 46 steals during the year and named team MVP. She was also the Big Ten leader in assists her senior season and currently holds the assist record with 12 in one game and the Michigan single-season assist record with 156. DeLong would go on to become head girls basketball coach at Arthur Hill High School, leading the Lumberjacks to the state runner-up finish in 1998. Later she was the school’s athletic director. DeLong was an assistant women’s basketball coach at Saginaw Valley State University in 1991-92, and was the Cardinals’ head coach from 2004-08.