Tom Brown graduated from St. Andrew’s High School where he

Class B runner-up team in 1954. The Bulldogs were the Saginaw   Valley champions from 1952-54. He played basketball three  years and the Bulldogs were crowned champions in both ’53  and ’54.  Brown would go on to Central Michigan College where he was a four-year starter in baseball and lettered two years in basketball. He was drafted by the Washington Senators in 1959. He wound up coaching at Bad Axe High School from 1959-62 as varsity basketball, assistant football and varsity baseball coach. In 1962 he took over the basketball program at Northwood Institute until 1967 when he assumed the same role at Northwood’s Indiana campus. He also served as athletic director. Brown also served as assistant football coach, head baseball coach and golf coach at Northwood.He helped found the Great Lakes Intercollegiate Athletic Conference in 1972 when he was an assistant to the president at Northwood. He later became president from 1979-82 before starting his own consulting firm in the Detroit area. In 1992 he became commissioner of the GLIAC when Vern Norris retired. It was a position he held for 17 years. When he retired in 2009 it was the longest tenure of any commissioner and the first fulltime commissioner in GLIAC history. During his turn at the helm the conference expanded from 10 to 14 members and increased the sports sponsored to 20 – 10 men’s and 10 women’s, including the reinstatement of football as a conference sport. The GLIAC moved from a Michigan-only conference to include members from Ohio, Pennsylvania and Indiana. In 2009, Brown was awarded an Honorary Doctor of Laws Degree by Northwood University. Since his retirement he does consulting work for NAIA schools applying for membership in NCAA Division II. 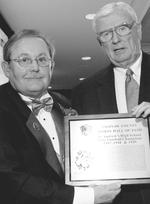