career in the Saginaw Township Soccer Association before going on to play at Heritage High School  where he graduated  in 1991. Anagnost then moved on to  Kalamazoo College where he was team captain for two years and team MVP  three years in a row. He garnered  All-MIAA first team honors  all four seasons he played –  becoming just the fifth player in the history of the league to achieve that honor. Anagnost also became the first player in the history of the MIAA to earn All-Midwest Region first team honors all four years. The 1994 MIAA Most Valuable Player went on to earn NCAA Division III All-America honors three consecutive years – becoming the first player in the MIAA history to achieve that feat.  In 1995 Anagnost was named the C.W. "Opie" Davis award winner for the top senior male athlete at the school. His professional soccer career began in 1995 when he was a member of the Chicago Power in the NPSL. From 1995-97, he played for the Mid-Michigan Bucks in the USISL and was named to the all-star team. Anagnost began his coaching career leading the girls varsity soccer at Bay City John Glenn from 1999-2002, and the Heritage boy's team from 2002-2002. He was both the Flint Powers Catholic High School boys and girls varsity coach in 2003. He was named Regional Coach of the Year and his team was a state finalist. Anagnost began coaching Central Michigan University's women's soccer team in 2008. In his first year CMU posted the lowest goals-against-average in the MAC and finished fourth in the league in scoring. The squad's 0.63 goals against average was the lowest in program history and the 18th best figure among all NCAA Division I programs. The Chippewas also posted a school record 10 shutouts (second most in the MAC). His career record in three years coaching at CMU was 40-12-7, a .737 winning percentage. Anagnost sported a 25-3-5 record against MAC opponents – a .833 winning percentage. His 2009 team posted a 17-4-3, the best in program history, and Central claimed its first-ever NCAA tournament victory.  He currently is the head women's soccer coach at the University of Miami (Fla.). Anagnost was inducted into Kalamazoo College's Athletic Hall of Fame in 2006. 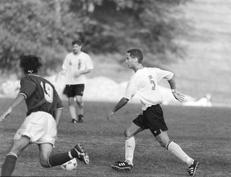