competitively at the age of 10 when she earned a

national record in the 50-freestyle with the YMCA Sharks.

Spatz swam for Heritage High School and captured the

Class A state title in the 100-freestyle as a senior.
As a prep she was the first to clock top area times in 11

100 breaststroke (1:08.92). In 1994 she won seven events in a state meet (Michigan State Long Course championship). The 18-year-old won the 200-meter freestyle (2:10.39), 200 backstroke (2:28.76), 200 individual medley (2:27.59), 400 individual medley (5:17.3), 100 freestyle (59.41), and the 50 freestyle (27.52). She also placed second in the 100 backstroke (1:07.5).  Spatz took her talents to the University of Texas and was an eight-time All-American. She earned most valuable swimmer honors as a freshman and the team went on to place third in the NCAA's. Spatz also earned most valuable swimmer honors as a sophomore and senior. As a senior she set a pair of conference records en route to four Big 12 titles – two individual and two relays. Spatz captured individual titles in the 50 and 100 freestyle (49.15, a conference record). She also swam a leg on the winning 400 freestyle relay team which set a Big 12 record with a time of 3:17.99. For her four first places and one second-place finish, Spatz earned Big 12 co-Outstanding Performer honors. Nationally she was a member of the USA national team from 1999-2004. She attended every major national competition except for the Olympics during this time period, including the Pan American and Pan-Pacific championships, World championships (three times) and the Goodwill games. She attended Olympic trials in 1996, 2000 and 2004. In 2000, Spatz was less than one second from making the United State Olympic team when she finished eighth in the 50 meter freestyle finals. In 1999, she clocked a time of 25.6 in the 50 freestyle - the eighth best clocking ever in the nation. That same year she finished third in the 100 meter freestyle at spring nationals. At the Pan American championships in 1999, she earned two gold medals and two silver medals. In 2000 Spatz earned a second and third place as part of relay teams at the short course world championships where they broke a world record in the prelims.  That year at nationals she earned her first national championship in the 50 meter freestyle. She went on to the world championships one year later and placed second in the 400 freestyle relay and fifth in the 50 freestyle. She ended 2001 with her highest world ranking at fifth. In 2002, Spatz earned third in the 50 freestyle at the short course world championships, was the captain of the women's Goodwill games team that took gold and earned silver in the 50 freestyle, and placed third in the Pan Pacific championships. 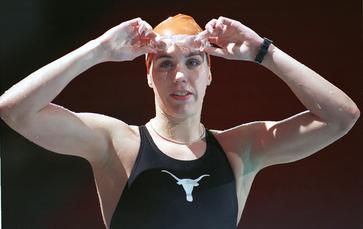