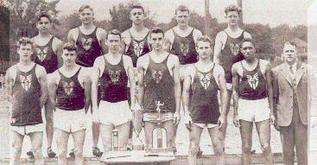 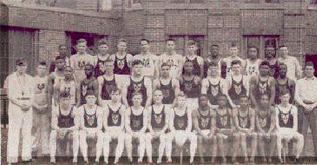 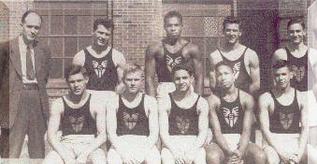 Coach Carl A. Nordberg's Trojans nosed out Flint Central by a
single point (29 1/2 to 28 1/2) when the half-mile relay team
sped to a 1:32.7 victory in the last event of the meet.
Making up the foursome were Marvin Cichowski, Jim Hickey,

Darrell Byers and Jim Blenkhorn.
Aside from the relay, the Trojans' only first place was Amien

Carter's victory in the high hurdles (15.5).Saginaw High, which

also won the Class A State Indoor Championship, was nearly

perfect on the season. Its only loss of the season came in the

event to capture it's fourth state title in a row.
The Trojans had 37 1/2 points to nip Arthur Hill, who had 34 1/2.
The Trojans, who equaled Detroit Northwestern's feat of grabbing
four straight titles, won three events.
The 880-yard relay team, made up of Ray Garrett, Bob St. John,

Jimmy Ellis, and Bill Conley, had a first place time of 1:32.90.
Warren Keyes won the broad jump with a leap of 22-4 1/2, while Bob Parson captured the half-mile in 2:02.2.
Saginaw High School Class A State Track and Field Championship Team - 1946
Under the direction of a new coach, Herb Korf, the '46 team nearly duplicated what the '45 trackmen achieved.
The Trojans triumphed over Arthur Hill 36 1/2 to 28 for its second consecutive state title.
First place winners included K.D. McKinnon in the shot put (47-10 7/8), Marvin Cichowski in the 200-yard low hurdles (23.6), and the half-mile relay team, which was made up of Cichowski, Jim Blenkhorn, Vernon Revell and Darrell Byers (1:34.4).
SHS, which placed in eight of the twelve events, dropped just two meets on the season - the State Indoor meet and a dual meet to Arthur Hill.
Saginaw High School Class A State Track and Field Champions - 1949
The Trojans eclipsed the record set by Detroit Northwestern in the 1920's as they won their fifth state title in a row. Saginaw scored in nine of the thirteen events for 44 points. Saginaw High's medley relay team, made up of Dick Gnirs, Nate Taylor, Dick Conley and Gaylord Nelson, had a first place time of 2:33.7. Jimmy Ellis won his heat of the 440-yard dash (50.5) and Warren Keyes captured the broad jump with a leap of 21-5 3/4. Nelson, Ray Garrett, Bill Conley and Ellis won the half-mile relay in a time of 1:31.6.