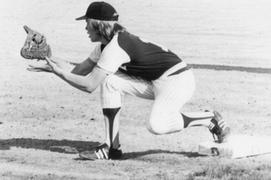 Mack baseball game, was a fireballer who was clocked at

over 90 miles-per-hour. As a sophomore he pitched the Commanders to the White Pine Conference crown in 1975 when he recorded an 8-1 record. During the season he pitched 16 innings of a doubleheader against Bridgeport and struck out 37 batters. He was switched to the outfield his junior season to rest his arm. As an outfielder that year he hit .458 (named All-League) to help Eisenhower win the White Pine title with a spotless 10-0 record. His senior year in 1977 saw him post a 7-0 record with an earned-run-average of 0.14.  Morley, who struck out 12 of the 16 batters he faced during one game, had three no-hitters on the season, struck out 100, and walked just seven batters in 43 innings. Morley was named to the all-state baseball team and in the high school all-star game he struck out 11 batters in five innings of work. During his senior year in football he averaged 7.5 yards per carry and scored 11 touchdowns as a halfback. He also averaged 37.6 yards on kickoff returns along with a 23-yard punt return average. In basketball he once had 22 assists in a game. He turned down several college scholarships and was the No. 2 selection by the Kansas City Royals in ’77 when he was just 17 years of age. Morley was named as one of the four top lefthanders in the Gulf Coast Rookie League. He was 6-1 his first year and 13-2 the next year with Fort Meyers. He had a 1.90 ERA and 62 strikeouts on the season and was named to the Southern League All-Star team. In 1979 he was 8-4 with a 2.89 earned-run-average with 63 strikeouts with Jacksonville. He was promoted to Triple-A Omaha and finished the season 3-2. In ’80 at Omaha he was 2-2 with a 3.08 earned-run-average before an arm injury disrupted his career.
Morley has coached several Little League all-star teams in the area and from 1990-93 he was the pitching coach for Saginaw Valley State University. He also was varsity baseball coach at Heritage High School and currently serves a pitching coach at Nouvel Catholic Central High School. Morley teaches health and physical education at Marshall Greene Middle School in Birch Run.