Thomas from SCSHOF on Vimeo. 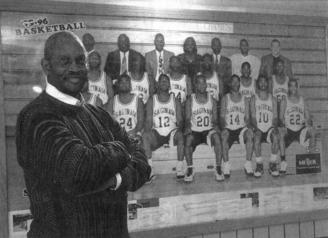 Marshall Thomas was a product of Saginaw

High School where he played football, basketball and track

before graduating in 1966. He attended Western New Mexico

University from 1966-72, earning both a Bachelors and Masters

degree. While attending WNMU, he played two years of

basketball and two years of football, leading the nation in punt

returns in 1967 at the NAIA level. He also participated for four

golf, cross country and basketball at his Alma Mater. He earned the bulk of his recognition as the boy's varsity basketball coach. Thomas coached a total of 33 years. He was the varsity girls coach for three years and was the varsity boys coach for 22 years. He compiled a 53-13 record with the girls and a sparkling 381-133 record with the boys' squad. With Thomas at the helm the Trojans captured the 1995-96 Class A state championship by defeating Southfield Lathrup, 67-60. Saginaw High School won 16 district championships under his leadership and the Trojans made five final four appearances. Along the way he earned seven regional Coach of the Year awards and four Class A Coach of the Year honors. Thomas also was Saginaw High's athletic director and retired from coaching after the 2003-04 season. He has assisted the Michigan High School Athletic Association as a color commentator during the boy's basketball state championship games. Thomas, who volunteers his time tutoring, is an avid golfer and has four hole-in-ones. He has been inducted into the Western New Mexico University Athletic Hall of Fame and was named Saginawian of the Year in 2009.