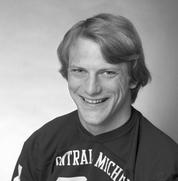 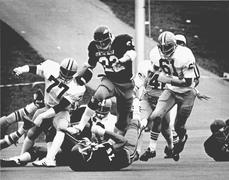 Jim Jones played three sports and collected seven varsity letters at Arthur Hill High School but football was his forte. He was the Lumberjacks’ top rusher, manned a safety post on defense, while also returning kicks his senior year. The versatile 6-2, 175 pounder earned all-Saginaw Valley League honors in football while also playing basketball and track for Arthur Hill. Jones captured All-SVL first team honors in basketball after averaging 13 points and 13 rebounds per game and was named the Chuck Fowler Award as the team’s MVP. The 1972 AHHS graduate was the recipient of the inaugural Herb Korf track meet scholarship. Jones was the aginaw Valley League champion in the 880-yard run and qualified in the 880 and long jump at the Class A state track meet. He received a football scholarship to Central Michigan University where he was a three-year starter at defensive back. Jones played in Central Michigan’s 1974 Pioneer Bowl win over Louisiana Tech - a 35-10 Chippewa victory. CMU then faced the University of Delaware in the Camellia Bowl in the NCAA Division II national championship game and the Chippewas’ overpowered the Blue Hens, 54-14. Jones, who was co-captain his senior year (1975), recorded three interceptions – one for a TD – while also coming away with two fumble recoveries on the season. That same year Jones led the Mid-American Conference in punt return average (11 yards) while tying for 15th in the nation. For his career he had 37 punt returns for 350 yards including one for 61 yards. Jones still ranks in the top 10 at Central Michigan in punt returns in a season. (23) and punt return average (11.0), both coming his senior year. Jones was drafted in the 13th round by the New England Patriots. After being cut by the Pats he took a year off and then signed with the Detroit Lions in 1978 as a free agent but was released. He was elected into Arthur Hill’s Letterwinner’s Hall of Fame in 1989. Jones would go on to coach varsity football at both Valley Lutheran and Arthur Hill high schools.