1918, in Saginaw and went on to become a three-sport

standout at Arthur Hill High School from 1936-38. During his

basketball team that lost the state championship game by
two points. Baseball was his top sport as the Lumberjacks
​ moved him to the mound from first base.  After graduation, Albosta went to a Detroit Tigers tryout at Briggs Stadium in '38. The Tigers signed him and sent him to their minor league team in Beckley, W.Va. But in 1940, Baseball Commissioner Kenesaw Mountain Landis declared that Detroit was guilty of hiding or covering up the contracts of 91 minor leaguers, including Albosta. All 91 were declared free agents. The Brooklyn Dodgers signed him and in 1941 he put together his best season, going 15-5 for Durham, N.C., leading the league in strikeouts and earning league MVP honors. He had eight shutouts on the year, two one-hitters and three two-hitters. Albosta was called up to Brooklyn for the pennant drive and made two starts for the Dodgers, losing both. He was on the roster but did not pitch in the World Series. He missed the next three years while in the U.S. Army. He returned to baseball in '46 for the Pittsburgh Pirates. He was 0-6 in 17 games, surrendering 41 hits in 39 2/3 innings. He struck out 19 and walked 35. He eventually returned to Saginaw where he played for the city's semi-pro team, the Saginaw Bears (10-13 record in 1950), who later became the Saginaw Jack Rabbits where he was 19-11 in '51. He later managed teams in Minot, N.D., and Carman, Manitoba, Canada. Albosta was inducted into Arthur Hill High School's Letterwinner's Hall of Fame in 2000. He passed away January 7, 2003. 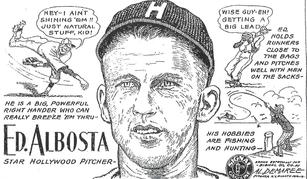