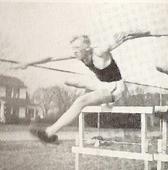 Charles J. (Whitey) Hlad was a star on Arthur Hill’s

become the premier high hurdler in the country in the

1940’s and compiled a long string of indoor victories

and held most of the world records. He attended Michigan

the world record of 7.2 seconds in winning the 65-yard indoor

Garden. He graduated from the University of Chicago in 1943 where he won Big Ten titles in the 120-yard hurdles (15.2) and the 200-yard hurdles (24.7), recording 25 points – the most by an individual. Hlad competed and won in the NCAA tournament, Penn and Drake Relays, and either beat or tied the exiting records. He graduated from Stanford University in 1949 with a Master’s degree in bio-physics. Hlad later served as a coach on the Olympic track team several times. He was inducted into the Arthur Hill Letterwinner’s Hall of Fame in 1962, and inducted into the Eastern Michigan University Athletics Hall of Fame in 1977. Hlad died in 1966 at the age of 46 in Denver, Co.