Bob Wallace attended Cass City High School where he graduated in
1953. An exceptional athlete, Wallace played earned 13 varsity letters
while competing in football, basketball, baseball and track for the

Red Hawks. The Cass City newspaper ranked Wallace as one of the

region’s top 10 basketball players in the 1950’s. He earned a Bachelor’s  degree from Central Michigan University. While at CMU Wallace played  football and basketball and ran track. Wallace played in two Red Feather football games while at Central. From 1955-57 he was a member of the Armed Forces and he competed for his camp teams while stationed in Germany. After attaining his Master’s degree he began teaching and coaching at Hemlock High School in the fall of 1961 where his coaching duties included head baseball and basketball coach and assistant varsity football coach. Three years later he was named head coach of the varsity football team and that became
his main focus from 1964 to 1984 where he built a winning tradition. During that time his teams compiled a 134-47-2 record, including nine league championships, five undefeated seasons, two 20-game winning streaks and an 18-game winning streak. The Huskies suffered just one losing season under Wallace. More than 10 of his assistants went on to be head coaches after serving under him. Wallace was named Class B Regional Coach of the Year in 1974, 1975 and 1977, and his teams won more football games in the 1970’s than any team in the Saginaw area. His teams were so dominant that Central Michigan League officials asked the school to switch leagues. He retired as football coach in 1985 and continued as a teacher in Hemlock until 1996. In 1991, Wallace was inducted into the Michigan High School Football Coaches Hall of Fame. In 2007, the Hemlock Board of Education members unanimously voted to rename the school’s football field Wallace Field in his honor. 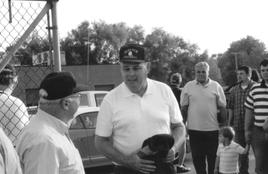