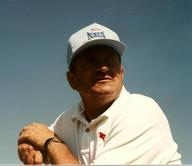 Becker from SCSHOF on Vimeo.

College staff in 1968 as Director of Business and Auxiliary

Services – just five years after the college's inception. In 1969 he began his 20-year role as golf coach, participating in 14 NAIA national tournaments, including a runner up finish in 1984. Becker was inducted into the NAIA Men's Golf Hall of Fame in 1986.  Before his retirement in 1998, the Saginaw native served as Director of Athletics for 18 years. During that time Saginaw Valley State University's athletic teams won 63 conference titles in 12 sports and captured five national championships in men's track and field, women's softball and bowling. Becker was instrumental in helping select the Cardinal as SVSU's mascot and he played an integral role in the design of the Jack Ryder Center and the remodeling of the Harvey Randall Wickes Memorial Stadium.  He also was involved in luring both the Detroit Pistons and the Detroit Lions to SVSU to conduct their training camps during the 1990s. Prior to his passing in October, 2008, a conference room at the Ryder Center was named in his honor. The Bob Becker Endowed Scholarship fund has raised more the $78,000 to benefit female student athletes at Saginaw Valley. He has touched the lives of literally thousands of scholar-athletes over a span of 30 years. In 2010, Becker was inducted into the inaugural class of the Saginaw Valley State University's Athletic Hall of Fame.