Archie Tullos got started in athletics at an early

age when he was crowned the one-on-one basketball champion

in the sixth grade at Heavenrich Elementary School. At North

football and basketball. Tullos went on to play basketball at

when he averaged 25.0 points-per-game. He then transferred to

team All-State laurels in Class B when he averaged 30 p.p.g.

The Knights finished runner-up in the Class B state finals and Tullos finished eighth in the Mr. Basketball voting.

He was named one of the top 10 players in the state of Michigan by USA Today. Tullos accepted a scholarship to the University of Detroit where he played from 1984-88. Along the way he was named to the Horizon League's All-Freshman team in 1984-85, while earning second team honors in '86-87 and was a first team selection one year later. During his senior season Tullos finished second in the nation in free throw percentage (90 percent) and ninth in scoring with a 26.0 average as the Titans finished runner-up in the conference finals. He owns two Horizon League season records by leading the league in three-point shooting percentage with .481 (63 of 131) in 1986-87, while sporting the top free throw percentage with .908 (139 of 153) in '87-88. During his senior year he set a Calihan Hall record by pouring in 49 points in a game against Bradley, which is fourth all-time in the Horizon League. Other league marks include being second in career free throw percentage (.881), fifth in single game field goals (18 versus Bradley), sixth in single-season field goals with 286 in '87-88, ninth in season free throw percent with .908 ('87-88) and 10th in single-season scoring. 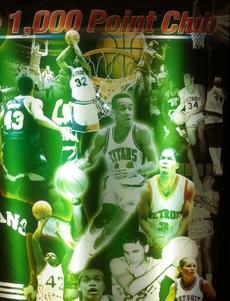 Tullos from SCSHOF on Vimeo.